Declared a Site of Cultural Interest 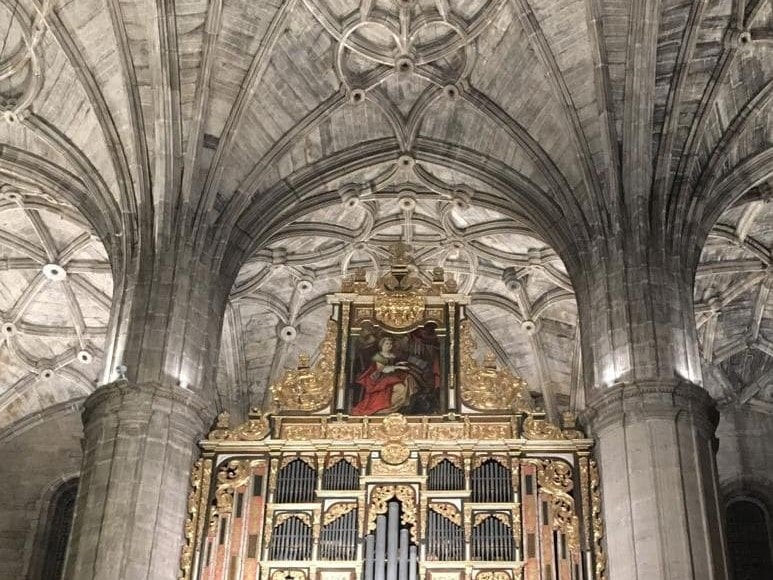 Located at the foot of the hill “LaMota”, ancient centre of the city, currently known as “The Watchtower” and built under the auspices of the Constables of Castile.
But without a doubt the most special element of all this great construction is the tower which served as a forerunner for other, later ones such as Santa María la Redonda in Logroño (1742) or the Cathedral of Santo Domingo de la Calzada (1765). The lower part is the work of Juan de Raón from 1671, in squared Gothic style. The more baroque upper part is by Agustín Ruiz de Azcárraga from 1720 and has an octagonal carillon crowned by a cupola with lantern.

The most impressive exterior feature is the main arched gateway with Calvary scenes and images of the Apostles and the Eternal Father next to the Velasco coat of arms. It is a work in plateresque style by Felipe Vigarny, one of the most outstanding Spanish Renaissance sculptors. The decoration with candlesticks, grotesques and garlands carved in stone and restored en 1999 introduces a new Italian Renaissance-influenced sculptural style to La Rioja and signifies the transition of the old church to the present church structurally in the form of a triumphal arch.

The hall floor or German “Hallenkirche” (“Hall Church”) is divided into three naves of equal height without a transept and with fifteen star-shaped ribbed vaults and different geometric arcs on pointed arches and abutted columns and pilasters.
Inside, the choir stalls and altarpiece stand out. In the choir stalls, we can contemplate the late 17th century masonry and the organ from 1798 by Domingo Garagalza, while the large retable of the main altar is the largest in the whole of La Rioja, dating from 1730 and made in highly decorative polychrome wood, giving us the feeling that it fills the whole space, or “Horror Vacui”.