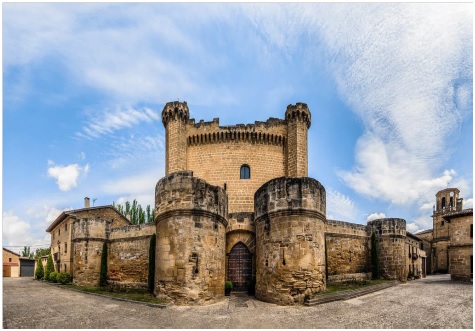 This castle was built with sandstone masonry in the second half of the 15th century, where before was a small fortified house and possibly a church because of the tombs founded, next to the moat, in the small square in front of it, although now they are covered, in the past they formed a necropolis (possibly) from between the 9th and 12th centuries.

Great strategic situation, since the road from Haro to Miranda passed under its north wall, in the highest area of the town. The outer enclosure has a rectangular floor plan, except for the northwest corner that joins the “torre del homenaje” (Homage tower). The perimeter is guarded by 7 circular towers, 4 in the front area and the other 3 in the back, in addition to a triangular spur in the center of the east side wall. The two towers that flank the main door would have the family’s coat of arms, of which there is a rectangular visible gap today.
The Homage tower, where the warden’s residence was located, has a rectangular floor plan with octagonal towers at the corners.
Most of the defense systems are preserved in this building, such as machicolations, arrow slits, embrasures and battlements. It had four floors divided by wooden floors, judging by the holes in the walls that would supported the original structure.
References: Valgañón, José Gabriel Moya. Notas sobre Sajazarra medieval: urbanismo, cerca, fortaleza. Brocar. Cuadernos de Investigación Histórica, 1990, no 16, p. 93-144