The stone winepresses are small centers for grape pressing and wort processing located in the open air, carved on the multiple limestone and sandstone platforms that dot the landscape of La Rioja. The vast majority are dated from the 10th century AD on, although all dating has been done through references in ancient texts (the oldest being from 959 AD) or through stratigraphic correlation with the surrounding necropolis

Generally there are two types of winepresses, ones for grape pressing and others for grape treading, the main difference between them is that the pressing ones once had a wooden press, with its corresponding structure. Those of this type are usually located in places where the terrain allows the structure to settle on a wall.

The second type, and the oldest ones, are the winepresses, which do not require any structure other than the stone to perform their function, being the farmers themselves who would tread the grapes to extract the wort. Taking that winepress as an example, we can say that they are made up of a treading pool (the largest pool), channels or pipes through which the wort would circulate, and finally a settling basin, where the wort would be left to rest and would be collected. 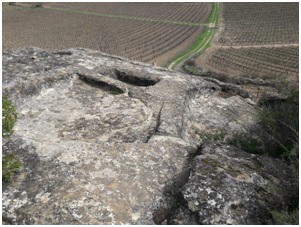